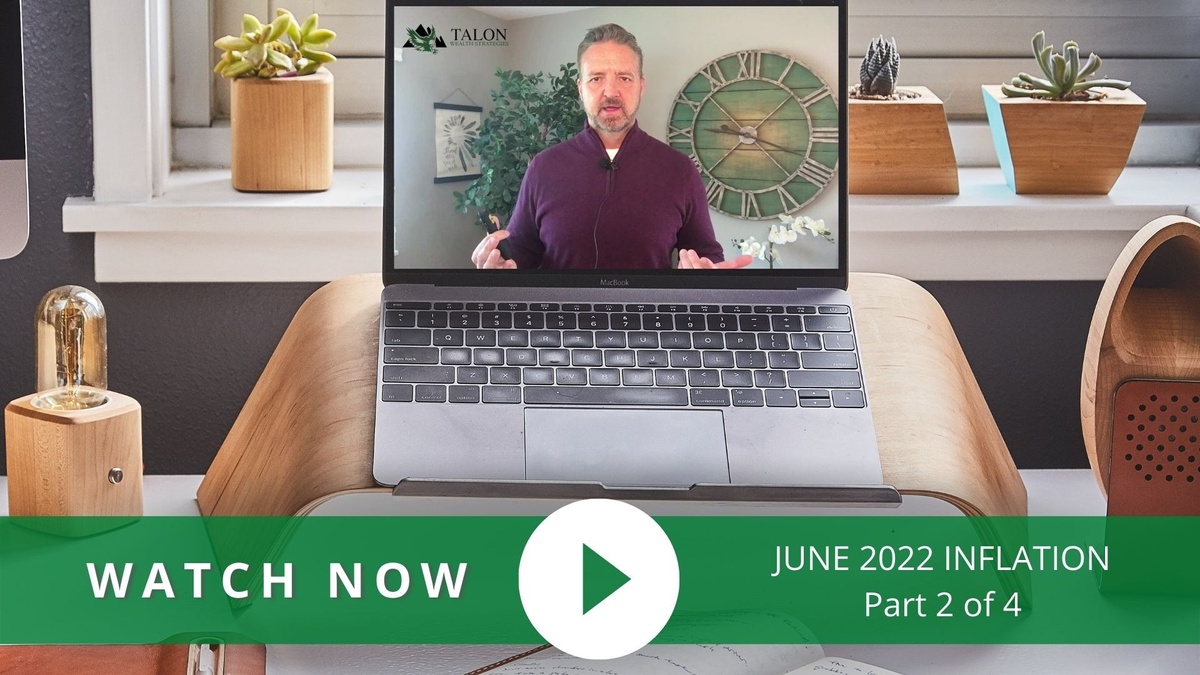 Okay, we’re back.  Doug Pardieck with Talon Wealth Strategies.  This is part two of your four-part series just going over a market update and talking about inflation, rising interest rates, a possible recession coming and then our outlook for the economy and for the stock market.  This is part two.

Today we’re going to be focusing on inflation and rising interest rates.  We all know the price of gasoline, our grocery bill, our utility bill, if you’re a renter, rents are going up at sometimes 20% increases.  There’s a lot of inflation out there and it’s spooking the market, it’s spooking investors and there’s a big fear that the recession is coming soon.  That’s caused a big sell off in the stock market.  Then the Fed has been raising rates which has really caused problems for the bond market, so let’s talk about all that right now.

Let’s talk about inflation.  If you look at this chart here, this is from our friends over at J.P. Morgan.  The inflation back in March 2021 was only at 2.6%.  If you had looked back over the last 20 years inflation has been right around 2% which historically that’s been a very low number.  We’ve enjoyed low inflation.  But all of a sudden inflation has come roaring back and we’re seeing inflation numbers above 8%.  In certain segments of the components that make up inflation we’re seeing double digit rises in inflation.  Some really big, scary numbers and that has caused a problem for the stock market right now for short term.  Investors are fearful that this inflation is getting out of control, the Feds are going to have to raise rates too fast, too aggressively, and that’s going to push us into an economic recession.  There’s a lot of fear out there and there’s a lot of people saying recession is coming sooner than most people think.  Time will tell and we’ll be talking about that in video number three.

Let’s get a little bit focused on inflation.  This is something that’s very critical that we’re watching closely.  The next inflation numbers are coming out I believe June 10.  We’ll be watching that and if it’s coming down then that is a good sign for the stock market and probably a good sign for the bond market as well.  As inflation goes up, the Federal Reserve is trying to control that inflation.  And the way they control inflation is they raise rates.

Take a look at this chart here.  Going back 20 years, the chart, the line going up, interest rates are rising.  The line going down means the Fed is lowering rates.  And they lower rates when things get dicey out there.  If we’re in an economic recession, the federal government wants to free up the money in the system.  They want money to flow.  They want banks to lend so they lower interest rates making lending easier, making money cheaper to borrow, and that borrowed money flows back into the economy and gets that economy going again.  During rough times interest rates come down.  But when inflation is getting out of control or rising and the Fed is wanting to slow down the economy, they raise rates.  I threw in these red arrows.  That red arrow indicates the past three recessions and you could see all three of those times happened after the Fed was raising rates.

Now, fast forward out here to 2022.  The Fed has started to raise rates but they’re nowhere near what they did in 2018, nowhere near what they did in 2000 and in 2006.  Back in 2000 and 2006 the rates were getting above 5%, and the old saying was we can’t have a recession until rates get above 5%.  That typically holds true, but the last recession was all about the pandemic and businesses were forced to shut down and that’s what caused that last recession.  It wasn’t interest rates.  The thing we want to be looking at here is inflation.  If it continues to go up, up, up that may force the Fed to continue to be aggressive with raising rates which could push us into recession.  We’ll talk more about that recession in the next video.

As long as the recession does start coming down, and we’ll be looking very closely at the indicators, at the numbers on June 10 when those new numbers come out, but inflation begins to roll over and start to slowly come down, that is a very good thing for the stock market and that could cause a nice rebound in stock prices.  We’ll be watching that, we’ll be monitoring your portfolios.

If you have any questions about inflation and rising interest rates, give is a call.  We’re here to help.  Doug Pardieck with Talon Wealth Strategies.  We’ll see you soon.